For the latest updates on UW–Madison plans and responses related to the COVID-19 pandemic, visit covid19.wisc.edu.

Please note visitors are not allowed in UW facilities and employees are working remotely.

The Kolb award is given to a graduate student, advised by a member of the Department of Community and Environmental Sociology, who has a record of outstanding scholarship. This was a rare year when our Scholarship Committee determined that two candidates were equally worthy. The winners Brent Kaup and Amy Quark were both advised by Professor Jane Collins.

Brent Kaup developed his interests in natural resources and the environment in Eugene, Oregon in the mid-1990s. Studying at the University of Oregon, he became increasingly concerned with the negative social and environmental effects surrounding extractive industries on both global and local levels. 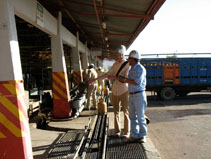 After receiving his undergraduate degree in sociology and history, Brent eventually made his way to Wisconsin to pursue his graduate studies. His intellectual interests focus upon how changing patterns of capital accumulation intersect with human perceptions and uses of nature. In particular, he is interested in examining the financial and geopolitical factors driving global increases in raw material extraction and the effects such increases have upon power hierarchies, state autonomy, and resistance. In his dissertation, Brent explores the socioeconomic and ecological challenges that the Bolivian state faced as it attempted to enhance its control over its hydrocarbon sector in a globally interdependent economy.

In the coming years, Brent wants to extend his studies of energy and natural resources by examining the sociohistorical trajectory of the hydrocarbon industry and the expansion of the now global natural gas trade. Over the past two decades, natural gas has increasingly become the energy-producing hydrocarbon of choice, promoted as more efficient and environmentally friendly than either oil or coal. Despite record surplus levels and the material difficulties of transoceanic transport, natural gas imported to the United States from overseas is slated to increase substantially in the coming decades. Examining hydrocarbons and the natural gas sector, Brent intends to study what goes in to making a commodity global.

Brent received a PhD in Sociology in June of this year. In the fall, he will be an Assistant Professor at William and Mary in the Department of Sociology.

Amy Quark’s interests in issues of food and agriculture began at an early age as she grew up on a grain farm in Saskatchewan, Canada. After completing her undergraduate degree at the University of Regina, Amy moved to Wisconsin to pursue graduate studies. 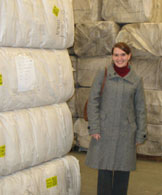 Quark’s intellectual interests focus on the intersection of political economy and theories of governance in the context of the global economy. Her dissertation explores negotiations over contract rules and quality standards in the global cotton trade. Amy considers how states and transnational firms compete to construct the legitimate authority to make rules for the global economy. Her dissertation demonstrates how state and private authority have been combined to govern the economy historically and are being recombined in new ways to govern increasingly globally-integrated sectors. She argues that, as states and firms compete to claim authority transnationally, they are constructing new sources of legitimacy based less on control over territory and representation of a national public and more on ‘neutral’ discourses of science and ethics and representation of ‘global publics’.

Amy plans to continue her research on changing state-capital relations in the global economy with a study of food safety. Recent food scares have drawn attention to the inadequacy of current, more nationally-focused regulatory arrangements for food safety. Her next project will consider negotiations among states, transnational firms and consumer groups over what kinds of governance institutions will govern food safety globally.

Amy defended her Ph.D. in Sociology in May of this year. In the fall, Amy Quark will be an Assistant Professor in the Department of Sociology at the College of William & Mary in Williamsburg, Virginia.